Article; A better workplace with automation.

On the farm Mægbæk near Lemvig, they have three washing robots helping Holger Lundgaard Madsens clean out their pig sty. For Holger it has never been a question about the cost of the robot, it has been about creating a better workplace, where his employees could focus on what they preferred – taking care of the pigs. It´s been a long journey. The first Washing robots introduced didn´t deliver on neither stability, durability, or reliability and its not to long ago, that the purchase of a washing robot could quite easily become a troublesome affair.

Luckily, this is not the case anymore! The washing robots found on the market today are both reliable, stable and removes 80% of the most abusive and tiring work when working with pig-finishers. Adding to this, the cleaning is done at night, when the farm owner and employees are sound asleep. In the morning, the farm owner and employees can show up to work with only a couple of hours cleaning the last 20% before the new heard arrives. 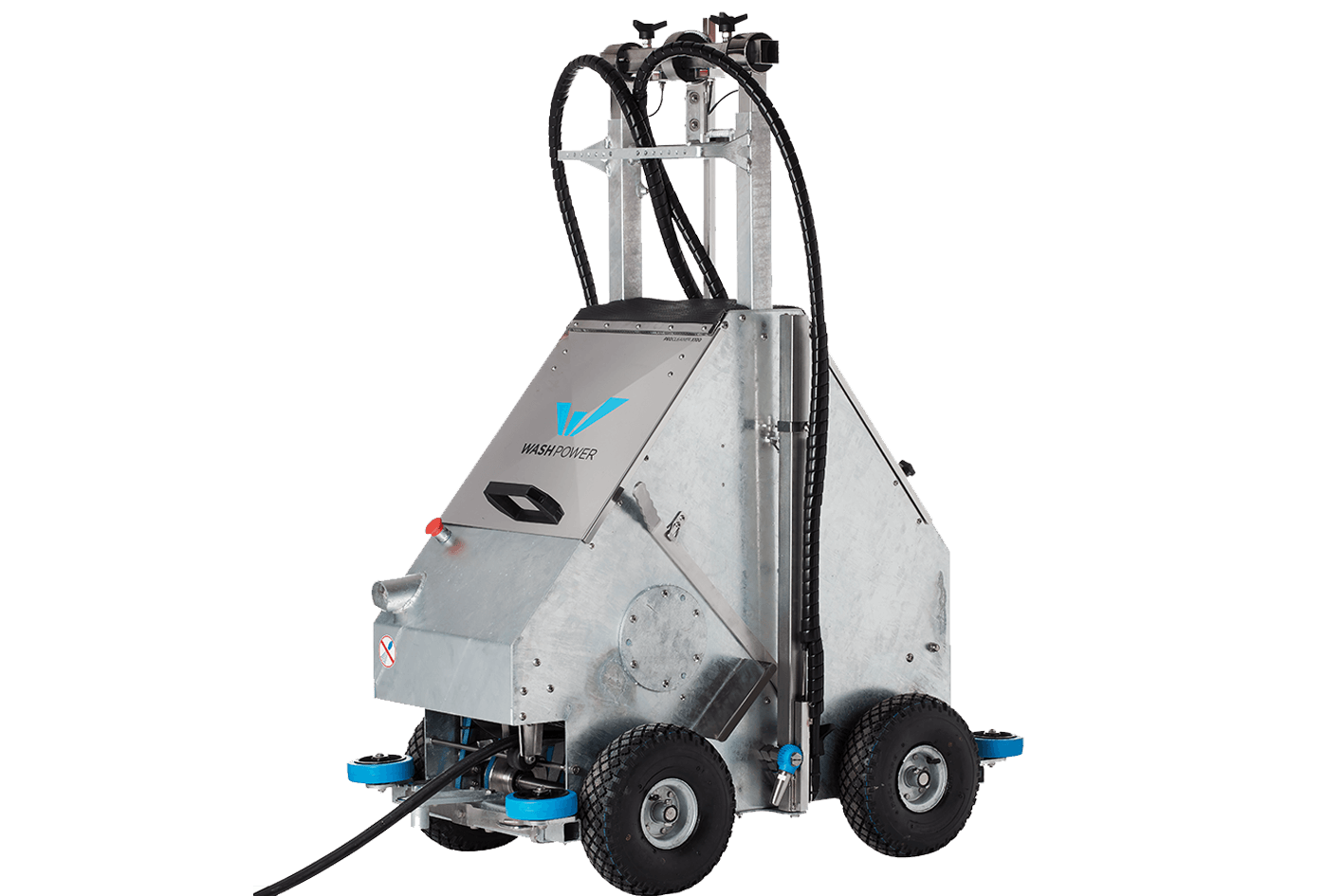 From one robot to two robots and now three robots.

At Holger Lundgaard Madsen, they invested in their first washing robot in 2017. The year after they bought another one and another one the current year, because as Holder explains it “They just work!”

“We never hear an alarm from the robot, it´s easy to set up and when you press start on the touchscreen you just know that it will clean. In the morning when we show up for work, we know that the pig sty is ready for the finishing wash.”

Now Holger also offers a work environment, that is alluring for new employees and where it is just as attractive working with pig-finishers as sows that is usually a much more attractive task. “We want to be good at attracting and retaining the good employees and trainees, who wants to stay with us for many years. They are all positively surprised when we tell them, that they are not going to be cleaning for days on end” explains Holger Lundgaard Madsen.

René Sunesen is the operation manager at the farm “Mægbæk”. He agrees with Holger Lundgaard Madsen that cleaning the pig sty is a one og the worst tasks when dealing with pig production.

“It´s a rather annoying task. Now that we have our washing robots, the notion of not using them to help clean is a dauting task. The farms are getting bigger and bigger, there are more units being produced and you are dirty from top to toe after a whole day of cleaning. Today it´s much easier and less dirty. A section with 700 pig-systems, which before took about 8 hours to clean, now only takes two hours after the robot has done its job, and you can clean the rest almost without getting dirty.”

To cut down on the time spend on the most annoying tasks has been a focus point for Holger Lundgaard Madsen, because as Holger explains “if there is a smarter and better way of solving a problem or task you have to do it”

An obvious place to improve the work environment.

The point of views from Holger Lundgaard Madsen are backed up by Marianne Norup, who works as a work-environment consultant and physiotherapist at the Danish Agriculture & Food Council. Here the danish farmers gets help with systematically and practically changing the habits at the farms, to create a better and safer work environment.

“our stance is that it obvious to use all the tools available at your disposal to bring down the number of abrasive tasks at the farm. Here automation plays a critical part and in this case a robot is the key regarding improving the work environment” explains Marianne Norup and continues, “When we talk about abrasive work tasks hours on end, which e.g., could be washing down pig systems, then when you can cut down upwards of 80% of the time spend on this, means allot less abrasive work.”

Have not thought about the economic, but then again.

For Holger Lundgaard Madsen the purchase of the three robots haven´t been based on the economical aspect. The robots have been purchased with focus of cutting down the annoying tasks, so the employees can do more of what provides their work-life with meaning and thereby happiness. This could e.g., spending more time taking care of the animals. And within that statement, lies another good point in automating as many processes as possible according to Marianne Norup:

“When you leave the more one-sided tasks to the robots, you create more time for the tasks, that requires human hands e.g., animal welfare where you need human interaction and logical sense.”

Although Holger Lundgaard Madsen didn´t thing about the economic aspects when buying the robots, it´s clear for him in hindsight that there are some economical gains with purchasing the robots.“It cost´s allot of money hiring and onboarding new employees, so looking in hindsight, the purchase of the robots have had an economic aspect due to the fact the employees remains employees for many years. This as well as we cut down on employees-hours cleaning.

“Quickly we have been able to optimize our time spend, even when there has been waiting time at the slaughterhouses.”

What about the future?

Operational manager René Sunesen cannot think of a future without robots anymore. Today he hardly thinks about the fact that washing down the pig sty used to be done manually.

“It would be hard to do without the robots. It would equal to do suddenly doing without computers and going to writing with pen and paper.”

Automation can have a positive impact on the agricultural industry explains Marianne Norup from the Danish Agriculture & Food Council.
“I believe that it could help providing the agricultural industry a better reputation when focusing on doing things smarter and automating the annoying and abrasive tasks e.g., cleaning. Which could mean an easier recruitment process both from within and from outside the industry”.